Well as Centurion tanks go she was nothing special except I had a certain affinity to this 52 ton hunk of steel. The painted name on her barrel said it all" BUKU" meaning plenty in Vietnamese and "BOOM BOOM" in English. 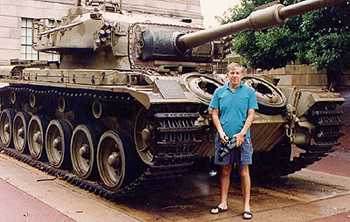 I remember the first time I met her

She was one of the strongpoints on the perimeter of the Armoured Squadron, where we were often rostered on to do picket duty while the bulk of the tanks were out bush.

After receiving instructions on how to start the engine every hour to keep the battery for the radio primed we settled down in the hull for the night .That night their was some activity on the wire and we alerted the few tankies who were in the unit but after some probing where trip flares were triggered a terrific thunderstorm hit the area,I was very happy to be snug in a tank that night.

After that initial contact with "BUKU" (we were now on first name basis) I would often see her sleek lines in the "Opera House" at the workshops and wander over for a visit; my Expense Store was very close.

Sometimes she needed minor repairs while other times it might be a RPG hit or engine overhaul; I always took the time to visit.

Finally one day her service had come to an end. She was going home and being replaced by another Mark in the Centurion series.

On her last day a few of her fans scratched their names on the Tac sign. 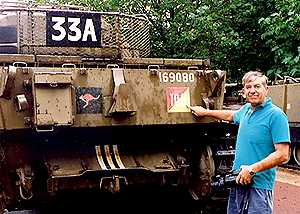 In 1993, while visiting the Canberra War Memorial I saw her again. It was the first time since 1969.

Sure now she had a new paint job and was totally cleaned of her Vietnam grime,but the paint on the barrel said it all BUKU BOOM BOOM. Naturally I had photos taken beside her

A postscript to this story which I thought was comical was when a security guard at the War Memorial overheard me say to my wife that I had scratched my signature on the tank. He questioned me about this, only seeing the funny side when I said it was in 1969 in Vietnam.