The Task Force defensive perimeter at Nui Dat was organised into Defence Sectors, with each Sector being allocated to a major fighting arms unit and coordinated at the Task Force Command Post 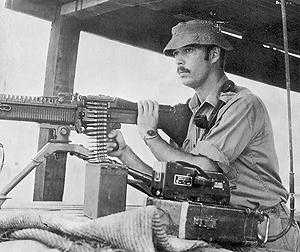 A feature of the TF perimeter defences were mutually supporting Strong Points. Some Strong Points were manned 24 hours a day while the others were activated during the dark hours or at standto.

The Strong Points were under direct control of Sector Defence with direct radio and line communication, and through them to the TF CP

106 Field Workshop was sited on the Task Force perimeter, adjacent to the Armoured Squadron. For Perimeter Defence, the Unit was placed under command of the Squadron.

We maintained and manned two Strong Points, "Eight Eight Alpha" and ""Eight Eight Bravo" which was manned 24 hours a day. 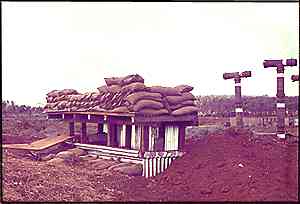 The Strong Points consisted of an underground bunker with an above ground Firing Bay facing "No Man's Land and with a defined arc of fire. The sleeping bay, metres below, catered for up to ten bunks. The upper and lower bays were joined by wooden steps with an additional exit point to the rear.

The Firing Bay was constructed of wood and corrugated iron with sandbag blast walls and sandbags over the roof. These became grassed and more or less blended in with the contours of the area.

The rostering was a single picket at each Post until 0200 hours when the picket was doubled until 0400 hours. Non-rostered pickets slept in the underground bay.

Every half hour, there was contact with the TF Command Post, by radio or line, usually radio, unless there was a breach of security.

The major weapon was a GPMG M60 machine gun. Each Strong Point had flares, grenades, comms equipment and a night vision "Starlite" scope which provided a green illuminated display as the picket searched his arc of responsibilty. As well each soldier on duty had his personal weapon, usually a 7.62MM Self Loading Rifle (SLR)

To the immediate front were barbed wire entanglements and trip flares. In our case there was also a lagoon

On some nights you could see bombing or artillery activity kilometres away in the hills or on the Delta. Other nights there was probing in different parts of the Task Force Area of Operations which you could hear via the radio traffic. Sometimes it was simply dog packs you heard; at other times, more exotic.

Parachute flares were were often fired, after getting approval from the Task Force Command Post; these made it easier to ascertain the nature of any movement. Sometimes the Unit Stand-To siren was activated after clearance.

The most common sightings by the pickets was "The Swedish Ghost".

On one occasion, I was woken to relieve the picket when he said there was something strange near our lagoon and flares had been ordered by Task Force. The whole Relief stood to.

We could see a group of figures illuminated from the rear about 500 metres away; in front, a taller figure dressed completely in white. Everybody wanted to peer through the "Starlite Scope" which distinctly showed more detail. The flares illuminated the area but as soon as they burnt out, contact was lost.

I have often heard of the American radio station, AFVN, talking of the European figure, "The Swedish Ghost" who commanded a Viet Cong Unit but disappeared as if supernatural. Maybe this was our mysterious visitor.

but that is another story