Besides the normal daily routine of the workshop there were times when genuine threats to security existed. Sometimes the alert was a practice ,while others there was a concern that the perimeter of the Task Force was under threat.

Each man was allocated to a two man weapons pit on the perimeter of the unit. In the case of the class of 1969 we had to dig them too, others to follow may have been more fortunate.

Although the threat was real enough especially to a workshop with a Field Engineer unit on the right and a Armoured unit on the left we looked out of place but still took security seriously, although their were occasions when humour won the day. 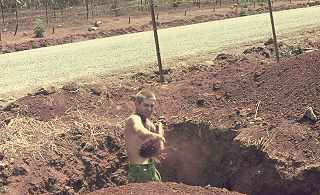 When the siren sounded and it was night time, the immediate response was that the lights throughout the Unit and probably the Task Force were extinguished.

If you happened to be at the Canteen or Movies you could be literally trampled in the rush as personnel tried to get their weapons and webbing which were racked outside.

The people in the tent lines fared no better in the darkness, they had to navigate many a tent peg rope and drainage trench on the way to their allocated position.

All round defence is good, with weapons pits all interlocking and everyone responsible for arcs of fire covering other pits, but only if the pits are fully manned. 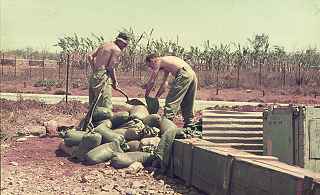 What would happen however was that when disorientated by instant darkness soldiers would end up four or more to a pit leaving exposed areas of perimeter. This however did not take long to sort out .

At other times soldiers would jump straight into the pit landing on potential hazards such as star pickets, weapons, or someone's unsheathed bayonet.

For safety sake drink cans were used to cover the tops of the star pickets while Hessian was wrapped around the shaft. Australian sandbags were preferred to reinforce the pits as they were in the construction of tent blast walls.The Hessian simply lasted longer than the U.S. "fantastic" plastic type.

There were occasions when they landed in quagmires of mud in the wet season; this certainly had the affect of waking them up.

Meanwhile if you were on picket at the strongpoints of 88 Alpha or 88 Bravo or in the Command Post you could hear the radio traffic and knew whether it was a real alert or just practice. In the "Tet" (Chinese New Year) season their were many alerts due to the increased activity of the Vietcong and the North Vietnamese Army all over South Vietnam.

I can understand that 106 may have seemed out of place on the Task Force perimeter with its high lift and other workshop facilities and the light and noise from working throughout the night as occasion demanded.

However cosied up to the Armoured Squadron and accessable to heavy equipment, including battle damaged equipment brought in by Recovery, is precisely where it should have been located. Consider otherwise, the problems in the Wet and the introduction of delays in getting damaged and faulty heavy equipment back to battle fitness

I am told that the practice now is to site the Workshop in the Brigade Maintenance Area as a sub-unit of a Logistics Battalion.

This may look very nice on Organisation Charts and be workable for Exercises, but in many "real" situations a Field Workshop will need to be divorced from the Brigade Maintenance Area