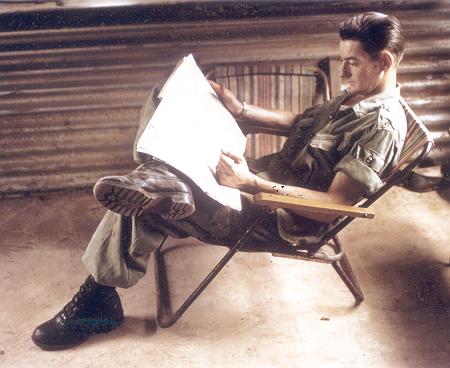 From their arrival in theatre, the Cavalry Squadron's M113 Tracked Armoured Personnel Carriers were under attack from mines and explosives. Heavy damage was being sustained by the vehicles accompanied by loss of life and maiming of the crews, especially the drivers.

The solution, devised by 106 Field Workshop, was to attach additional armoured aluminium plate to the sponsons and belly of the vehicles and to modify all the vehicles as rapidly as possible.

Paul Edwards led the Welding Section of the General Engineering Platoon and was responsible for the success of this field modification program. Its success cut the casualty rate dramatically. Many members of the Cavalry Squadron owe their lives and limbs to this program.

Sergeant Edwards was mentioned in dispatches for this work

Paul was born at Ayr, Queensland, in 1940. He joined the Army in 1959 and served with RAEME as a Sheetmetal Worker. In 1966/67 he served for the first time in South Vietnam. He married Desley in 1968 before again being posted to South Vietnam in late 1969, this time to 106 Field Workshop. Desley and Paul had three sons, Shaun (1970), Darren (1973) and Lee (1981). Darren followed his Dad into the Sheet Metal trade as did Lee. Shaun is a banker; Darren is married, in London, and works for a record label; Lee is in his apprenticeship. Paul retired on 25 Apr 1980 and worked with Mack Trucks in an administrative capacity. Sadly, Paul died on 25 Nov 2000 of lung cancer after a short illness.

Mentioned In Dispatches
The Citation

Sergeant Paul Charles Edwards enlisted in the Australian Regular Army on 13 April 1959 and was allotted to The Royal Corps of Australian Electrical and Mechanical Engineers. He joined 106th Field Workshop in South Vietnam on 5 November 1969.

As Sergeant Metalsmith he was in command of the Fabrication Section of the Workshop. This section, which consists of welders, a sheetmetal worker and a blacksmith, was always under severe pressure because of the heavy workload of continuing operational Priority One repair, modification and manufacturing tasks.

Sergeant Edwards by his high standard of workmanship, personal example, and leadership achieved outstanding results from his section which worked happily with him for extremely long hours. Because of his efforts the fighting units of 1st Australian Task Force have always had equipment available to meet their operational commitments. His devotion to duty, zeal and practical intelligence reflect great credit upon himself, his Corps and the Australian Army.