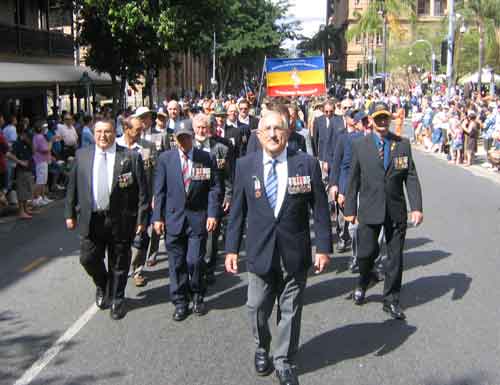 You never know what the turnout will be like at an Anzac Day march. What numbers would we get in 2007 and how important were the numbers anyway?

For we 106ers, it will always be a struggle to get large numbers to march at any parade because we are scattered all over the country; our potential numbers are relatively small as our association is virtually restricted to veteran members who served in Vietnam.

Many of our members were national servicemen who did the job they were asked to do and merged quietly back into society after discharge - some of these blokes are slowly 'coming out' and only now re-establishing contact.

Our unit had a relatively short life in Vietnam and even in Australia when it was later reformed at Coopers Plains it became the victim of re-organization once again.

It is interesting to see increasing numbers of family members seeking information about their fathers they learned served with 106.

We cannot claim the establishment lifespan of a 101 or a 102 but we clan claim precedence in active service forward operational deployment.

The numbers of 25 or so who attended therefore were not as important as the fact we were there with the official recognition as a veteran unit among other veteran units of other eras, of other conflicts and of other Corps. 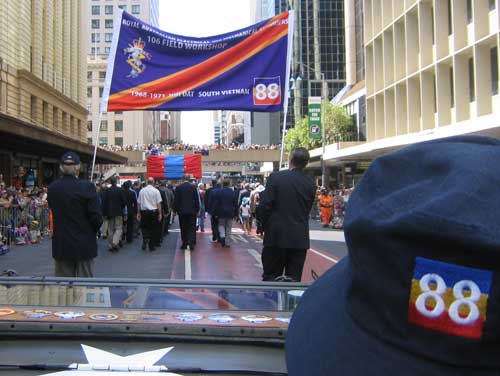 We assembled and marched accordingly with our own banner. All those who marched were pleased to be identified with the unit that gave then a unique experience and a proud one at that.

It was significant to get two of the unit's former OCs Claude Palmer and John Sinclair to the first turnout of 106 as a veteran unit. Unfortunately Norm Hicks-Hall, the founding OC was not able to attend. A bonus was also having Milton Pearson, the first CSM, up from way down south - there to rightfully share the limelight. Thankfully the jeep club got these gents around the streets.

I am thankful that I, with the 106 committee, was able to achieve the turnout of 106 Field Wksp. The symbolism of this event should not be lost on fellow 106ers.

It was a privilege to head the parade and I did so in acknowledgement of all those who served in 106 and who could not attend.