Several of our numbers attended Dawn Service at various locations and then we gathered for the 95th Anniversary of the landing at Gallipoli.

For ANZAC Day 2010 in Brisbane it was a beautiful Queensland day with the sun shining and a temperature of 29C+, a little too warm for marching but bearable.

The 106 Field Workshop RAEME Assoc was in position 154 in the days marching order  immediately preceding the Queensland RAEME Association. At the assembly point our numbers grew slowly.

Wheelchair bound ex 106er Bruce Eklom was one of the early ones who passed by our group. Bruce was being cared for by one of the lads from the Vietnam Veterans Motor Cycle Club who was also going to wheel him along with their group in the march. Bruce has had his ups and down since his horrific motorbike accident but still enjoys catching up with 106 friends. The motor cycle club does a tremendous job in getting Bruce around the traps. 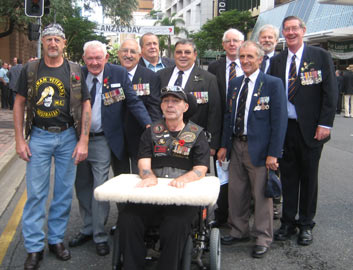 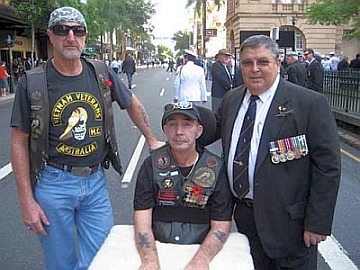 Bruce, VVMCC carer, myself and other 106ers.

Our 106 Fd Wksp Association banner looked great in the sunshine. 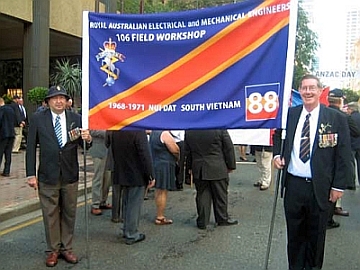 John Lyddiard flew down from Townsville for the day accompanied by his son Michael who was severely injured while disarming a road side bomb during service in Afghanistan; the Army has subsequently called an Afghanistan fort after him -Fort Lyddiard. Michael is still in full time service with the Engineers at Townsville's Lavarack Barracks. Michael joined our marching group with his father. 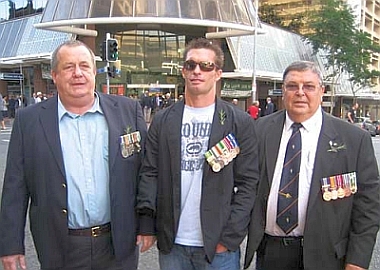 With John and Michael Lyddiard

We also had two other visitors in our ranks -Michael Buldo (Melbourne) and Margaret (Sergeant Major) Thorpe (Bribe Island).

106's Wayne Bingham followed up in the rear in a golf buggy.

I was going to do the ANZAC Day March route in the golf buggy provided for veterans who could not march adequately but I gave up my ride to Wayne Bingham whose stump was chaffing on his prosthetic leg. Somehow I got the gig as the group right marker. I started off really well calling the pace and giving everyone a good laugh. After we passed the saluting Dias I began to waver. It was a bit of a struggle as just 4 weeks earlier I had been in hospital for a major operation; anyway I made it to the end of the march in reasonable condition.

The streets of Brisbane were lined with an outstanding crowd with children and adults waving the Australian flag. Each year there seems to be an increase in numbers, with everyone cheering and shouting �good onya and thanks.

As we approached the saluting Dias, one of the TV stations cameramen on foot zoomed in for a good squiz of our Banner and the small group of men marching behind. Our President gave the order for EYES LEFT and we marched as if it was only yesterday -we responded with a well executed manoeuvre on approaching the dais as the Governor of Queensland took the salute.

After the FALL OUT at the end of the march, we gathered for a small photo shoot of our 106 Fd Wksp members. Once the photo session was completed it was off to the Port Office Hotel for some amber ale and a chin wag with mates. 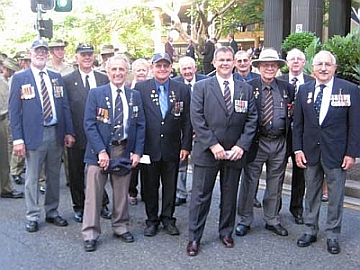 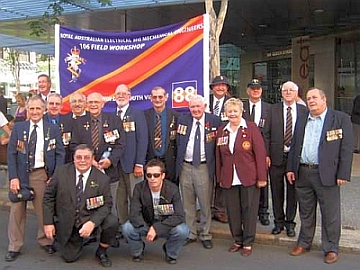 Accompanying us were Geoff Smith's wife Maureen, daughters, Megan and Amanda and also his elder sister Jeanette who had flown up for the day -her nephew Luke who is with 6 RAR was marching prior to being deployed to Afghanistan on 27th April 2010. Luke marched separately with his mates. 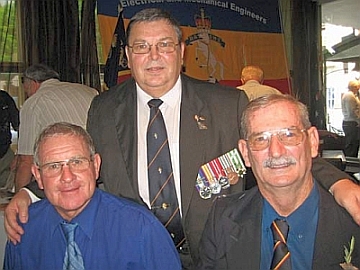 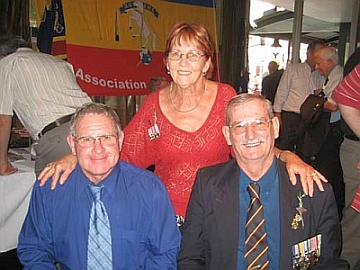 We also had Merrin Sansom, Lorrain Schafferius, and her sister Julie, join us after the march. Ciao till next year.