106 Field Workshp RAEME (Royal Australian Electrical Mechanical Engineers) does not show the full picture of personnel posted to the Unit. There were also personnel from

Now the first three Corps are quite obvious in their tasks but what about RAAOC.

Napoleon once said "An army marches on it's stomach" but failed to say that the supply of everything in the army is important to a successful campaign.

This is where RAAOC comes in.The Army as a whole has needs as varied as you can imagine some examples being bedding,clothing,weapons, furniture, vehicles,aircraft and foodstuffs.

In a specialised unit such as 106 Field Workshops where the core task was to repair Centurion tanks, Armoured Personnel Carrier's, Weapons and associated equipment,the list of stores needed was infinite. Spare parts have to be originally acquired in their country of origin, sent to Australia, catalogued then sent to the theatre of operations where they are stored for use but sometimes needed immediately.Basically wars are won or lost on the guaranteed supply and repair of equipment. 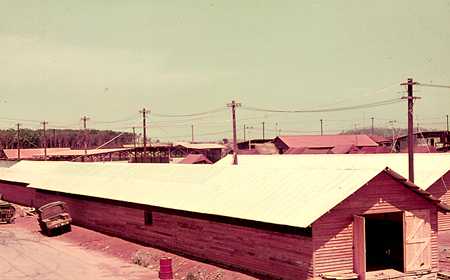 RAEME personnel in 106 looked after the Q Store which supplied day to day stores such as clothing,personal weapons and ammunition and the basic tools needed to carry out operations from mowers to mosquito repellent, webbing to light bulbs.They also provided a laundry system contracted through a local village. 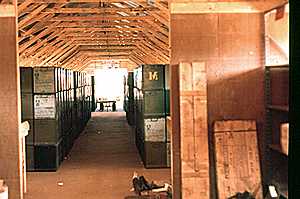 The RAAOC Stores Section main task however was the supply and storage of the specialised repair parts needed by the unit.

Repair parts is literally a Pandora's Box. When you think about say something as large and technical as say a Centurion tank or Armoured Personnel Carrier you have to also take into account the age of our equipment as opposed to the current model in production in Britain or the U.S.A. I remember for instance that the British had retired the Centurion in their Armed Forces and now had the Chieftain Main Battle Tank.

Storage was another problem in a theatre well known for humidity and a tropical wet season. When I arrived December 1968 the Unit had just been redesignated 106 Field Workshops, where as before that it was named 1st Armoured Squadron Workshops.The Stores Section was located near the main boom gate and was one old wooden building and some canvas tents.

Within a few months however work was started on a new Stores Section with wooden buildings. This consisted of 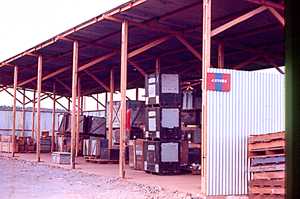 There were also buildings made from timber frames and corrugated iron roof and sides but with the front open for access by forklift. These were on hard standing and stored the Major Unit Assemblies such as engines and gearboxes.

Dust was a constant problem and special coverings and seals were used to keep the item in good condition.

My particular Store was the Expense Store a separate building where everything which was expendable(not to be returned) was kept this ranged from nuts and bolts to paint and oils,abrasive papers to glues.Whenever I was not on picket,patrol,hygiene duties or mess duties this was my prime task.

There was a paper flow priority system for all repairs as you can imagine a mower maybe important to repair but a weapon would take precedence.

The above is just a small insight into the task of the RAAOC Stores Section at 106 Field Workshops to show how important all Corps were to the overall effectiveness of the Unit, the Taskforce and ultimately the war.