106 Field Workshops personnel were usually billeted in four man canvas tents with sandbag blast walls. 240 volt electricity was supplied to these by the Taskforce Grid. The tent usually had a single incandescent bulb and most had adapters for plugging in other electrical devices. The tents were renovated quite extensively by adding verandas,cupboards and tables all made from packing materials.

Stretcher type beds were usual although later in 1969, metal framed spring base beds and metal wardrobes were common. Everybody was issued with a foldup chair which could be taken to any entertainment area. 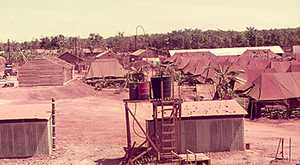 The ablution blocks were tin sheds one part as a shower the other a toilet block,their was also a small section for a laundry with the famous "Lightburn" cement mixer type washing machines. The toilets affectionately named "thunderboxes' positioned over deep holes dug especially for the task. The urinals or "pissaphones" were a old oil drum buried in the ground with gauze over the opening to stop insect infestation.The showers were a gravity fed system relying on top ups to metal tanks, their was an immersion heater system but cold showers were not that bad in a tropical environment such as Vietnam. The immersion oil heaters were usually started by the picket at first light and you would know this by a loud "bang"a it achieved ignition, quite a hair raising experience for the novice. 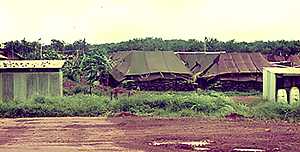 Another time you may be disturbed is when having a few quiet moments in the ablution block your dream could sometimes be shattered by rocks landing on the corrugated iron roof,followed by the sounds of laughter.This practice was usually reserved for the newly arrived soldier and like other jokes was good for morale as long as it did not get out of hand.

At the Main entrance to the unit was the Administration building consisting of partitioned sections for the OC,Adjutant,CSM and Orderly Room. In one end of this building was a all states "pigeon hole" post-box cut into the wall. 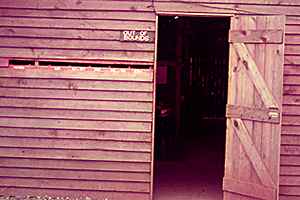 Behind this building stood another wooden building the known affectionately as the "boozer" or "wet canteen".This had a bar and travel posters denoting Aussie cities. Outside a wooden slotted rack held personal weapons and webbing.Also outside their was a large screen for showing movies and on the roof a sign in RAEME colours reading "The Punch Behind The Taskforce Fist" and this certainly boosted morale. 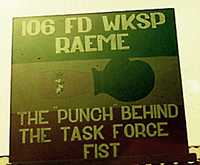 Other necessary amenities were the Unit Messes consisting of segregated Officers, Sergeants, and Other Ranks tents (later buildings). The kitchen(not an amenity but a necessity consisted of a large tent(later building) with fold up tables and chairs where personnel were catered for at different sittings.

Drinking water was provided at many locations in the unit to make sure dehydration was not a problem. Of course being Australian "brew" places appeared anywhere and everywhere a power source could be found.

Board games and card games were popular in off duty hours, you could listen to (AFVN) American Forces Vietnam Radio or read a book from the unit library.The popular pastimes were of course sending and receiving mail. Parcels were shared, photos prized but more importantly mail was and is still the most important morale booster in a war zone.