Unlike our weather patterns in Australia, Vietnam has a distinct wet season, May to November, where the mosquitoes get even bigger than the rest of the year.

Torrential rain followed by unbelievable humidity caused soldiers not used to this weather to suffer many discomforts mainly prickly heat but also dehydration.

Travel on the internal roads and tracks of the Taskforce could be very dangerous for the unprepared soldier. Mud would soon became a quagmire and vegetation became impenetrable as it seemed to grow before your eyes.

On one occasion I awoke with a sore back, pulled my stretcher aside, and, growing through the floorboards, was a banana tree shoot which had grown overnight and pushed into my back.

The other problem with The Wet was of course the trench works throughout 106 (dug especially for the wet season runoff) soon became overgrown and could easily harbour snakes and vermin.

Personal weapon pits were also a trap for the unwary who may seek protection in an emergency only to find themselves floundering in chest high water.

Maintenance of overgrown areas was always a priority. The jungle itself seemed to grow around you as the rain came down in heavy sheets ,you would hear it coming like a steam train. 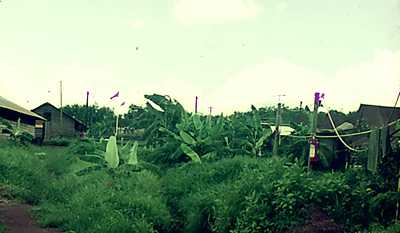 I remember times when their was a live show at Luscombe Bowl near the airfield with hundreds of troops as the audience when torrential rain swamped the area; the soldiers would just sit through the performance and not move. The entertainers were amazed (the stage had a roof) but a live show was important for morale and no one liked to miss them. I think we all appreciated the commitment of the entertainers who made the effort because it was not always safe.

Most soldiers had some technique for stopping water running down the barrel of their rifle. I think that 106 personnel did a roaring trade in vinyl sheaths for barrels while I saw others using condoms or bicycle tubes.

Imagine too the thought of flying either in fixed wing or rotor aircraft when the rain is so torrential. Hazards are many in a country of such weather contrasts. Clothing and other kit suffered in these humid conditions by being affected by mould and mildew. Weapons and all metal parts were a target for corrosion so had to be inspected and protected even more readily than back in Australia.