In 1968 I could not have forecast what would befall me when, as newly commissioned National Service Officer with the rank of Second Lieutenant (Probationary), I was posted to Bulimba, Brisbane, as the nominal Adjt/QM of 301 Fd Wksp (with Maj John Sinclair as the OC for a short period, followed by Maj Norm Hicks-Hall). As I was the QM without any unit time experience, I was sent on the Quartermaster's Course at Canungra.

At COMAFV, the Australian Force Headquarters Saigon, meeting up with Lt Jimmy Hislop who was on the EME Staff of the Headquarters and who was slotted to be the Platoon Commander of No2 (General Engineering) Platoon, we went into our first serious planning conferences

When we arrived in Nui Dat, we were lodged with C Sqn, 1 Armd Regt until we got our own facilities. We were joined by a Kiwi officer, Capt Don Baker, RNZEME, who had been on the staff of HQ 1 ALSG, Vung Tau and was the Platoon Commander of No1 (Vehicle) Platoon. The Stores Section Commander, Lt Graeme (Sluggo) Stevens, RAAOC, arrived a week or so later

Other members of the command staff did not arrive until late into November 68 and as late as February 69. These included the Workshop Manager and 2IC, Capt Russ Barker, the ASM, WO1 Col Philp and the CSM, WO2 Milton Pearson.

For me, it was a case of learning fast on the job and clinging, as best I could, to a steep learning curve. It was not just setting up the accounts and ordering, receiving and distributing everything needed for the new Unit to operate in a Theatre of Operations, but quickly coming up to speed with the wheeling and dealing to get what we were entitled to, and what we weren't necessarily entitled to but needed to live and operate. There were many things to be done that were not mentioned in the QM's manual or even thought about on the QM's course at Canungra.

Capt Brian Coulter commanded 1 Armd Sqn Wksp. Brian had been very happy with his own command and cherished his black beret, living and working with the RAAC. The same could be said of the men under his command. They were somewhat disappointed that their domain was being merged into the new unit. Who could blame them as they had performed their task so well

It was very important that the reorganization was seamless so as not to leave the tanks without adequate repair and recovery support, so Brian and his senior staff, like Lt David Catterall, RAAOC and CSM, WO2Laurie Lilley, got on with the job of helping to get everything organized including the integration of his men into the new organization. In effect they were the in-place Advance Party and we owed them a lot for both their planning and the physical work tasks undertaken

106 Field Workshop was not entirely the addition of EME resources to the Theatre of Operations. Much of the resources were already in place but, it was decided, needed to be reorganized to meet the increased level of repair demanded by 1 ATF 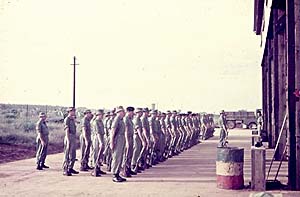 Although we were hamstrung by the pressing need to build our site, operational support of C Sqn,1 Armd Regt and A Sqn, 3 Cav Regt continued in full throughout the establishment phase. As well, some operational field repair and recovery support was provided other 1ATF units before the workshop was fully equipped and manned.

Although we were still living rough, the process of administrative organization and equipping was well in place by January/February 1969 when Maj Hicks-Hall, on promotion to Lt Col, was posted to COMAFV, Saigon as the Assistant Director Electrical and Mechanical Engineers (later equivalent, SO1 EME). With Maj Claude Palmer assuming command, 106 Fd Wksp effectively commenced full support all 1ATF operational units, providing repair and recovery support throughout the 1 ATF Area of Operations.

106 Fd Wksp, once manned and with its facilities largely in place, did not take long to establish its presence in 1 ATF.

When I left 106 Fd Wksp, the unit was a vibrant functioning entity within 1 ATF. Through the direction of both OCs, we were able to concentrate our energies on supporting our customer units to the full extent of our capacities and expertise and looking after our soldiers welfare. Some of the niceties and constraints of Australian home based procedures were supposedly there to be followed were sensibly left locked in the cupboard.

I have only good memories of the time I spent there - working with great people, gaining the experience that I carried into later years and as I felt I made a good fist at a job for which I initially had absolutely no experience.

Out of interest, couple of years back I re-visited the Nui Dat location of 106 Fd WKSP. Not hard to find once you locate SAS Hill and the strip.

Just drive down along the old strip to the end where the PX was (it is not possible to land an aircraft on the strip today since the Nogs have built houses/dwellings on the tarmac) and turn right along the original track that is in good condition. Proceed along to the 'Y' junction, bearing right, proceed a short distance to a another 'Y' junction, then bear right again and you are there.

The 106 Fd WKSP site is farm land and open space now with a number of identifying features still in existence.

Would be a great spot to have a BBQ one day. Possibly a venue to hold the 40th anniversary of 106 Fd WKSP in year 2008. (Pollies might give us some money to offset the travel - lets face it they have given us bugger all so far.