A Jumble of Impressions
John Sinclair

The day promises to be hot – the blue of the sky, muted by drought dust, is bedaubed with cloud

In my seventy-fourth year, somewhat reduced, with shoes polished, strides creased and a Corps tie around my neck, I scrabble through drawers searching for my issued medals that have not seen the light of day for three decades — an ANZAC Day novice.

Why today?
Strachan and Bond drove me into a blind gully leaving me with no choice, demolishing every excuse and obstacle, one by one.
Why not before?
The reasons are many and varied but principal were the prevailing community attitude after Vietnam that made it necessary to order Australian soldiers not to wear uniform in Public — then,when I heard of it some years later, the treatment after discharge of the National Servicemen who served with no choice in the matter yet still did their duty and more. It doesn't take much wit to understand that, if the Regulars, remaining in the Army family, were distressed by community attitudes, how appalling was the return our National Servicemen, on their own, to such a community — the behaviour of the then members of the RSL and their lack of support and wide spread animosity towards fellow veterans can never be forgiven – Lest We Forget. Yes. But only selectively for a decade or so. 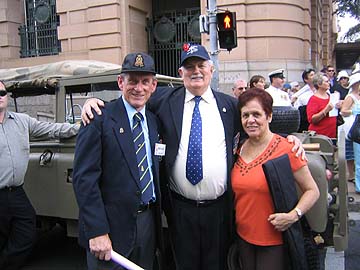 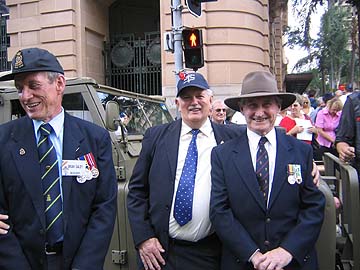 Putting these thoughts away, Pauline (as is not her wont) and I walk the short distance to the bus stop. After half an hour the bus is doing a meander through South Brisbane heading for the Victoria Bridge, over one of the main thoroughfares a large electronic sign with blinking text

Leaving Pauline to meet up with our daughter and grand kids, I wander up George to the corner above Elizabeth. The footpaths are already packed behind barriers. Emergency Service volunteers are thick on the ground to help and guide. Young girls come and offer welcome cups of water.

Elizabeth towards the river is packed with massed Navy – in Dress Whites – positioned ready at the Head of the March. There are sounds of bagpipe and drum playing in the plaza opposite. On the side of Elizabeth in front of me are the banners of the SAS and RAAC Associations. A large group of leathered up Ulysses members arrive, but no sight of Bruce Eklom's mob. There are many friends and acquaintances from other Corps. The time passes all too quickly. A cacophony of many bands tuning up. A Force's band, to the cadence of their drums, wheels out of Elizabeth and down George, a body of men and women in World War 1 uniforms follow; behind them what seems like a dozen Maxi Taxis with wheel chaired vets discernable through the tinted windows. Army associations of WW2 units and formations, under their banners, advance down George and halt before crossing Elizabeth 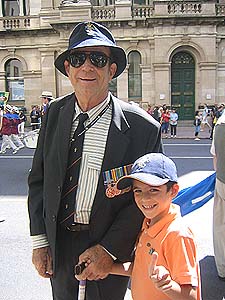 Right on 10, a sortie of F111s roars low over the city, to be followed by a mighty drum roll from one of the Service bands. The Navy, followed by the RAAF contingents, interspersed with bands of every hue and age, wheel out of Elizabeth into George. The onlookers burst into continuous cheering and clapping.

With two white sussaphones standing high and young lasses following with flags, a large band from John Paul College, in full cry, wheels into the March.

The on-lookers outpouring of patriotic fervour and pride in the Armed Forces catches me unawares – it overwhelms.

Phyllis Bond suddenly arrives beside me. A big hearted lass, she is looking after the 106 light duties muster. We move to marry-up with the Jeep Phil Bond has organised for us.

We walk around the corner into Elizabeth slap bang into our ex Corps RSM, Milton Pearson. Milton is doing it tough today; he is quite dizzy. We move toward the Jeep mounting place, Milton with an arm lightly on my shoulder to steady himself. Talk about the long and the short of it. Except for the mud, we must have looked like that photo of Norm Provan and Arthur Summons after the 1963 Rugby League Final.

Milton tells me how much he is regretting that he mightn't catch up with his son and two grand sons who live on the Sunshine Coast. Suddenly they are here.

Phyllis walks me up to waiting point. Jeeps line the street with a marshaller and a platform to make it easy to get into the vehicles. Claude Palmer is here with both ankles strapped and a walking cane. His young grandson, down for a couple of weeks from Singapore is with him. Phyllis arranges chairs for us. She gives us each a card marked 119. 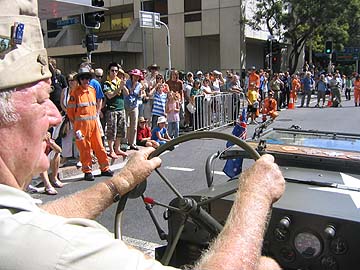 Ralph Murfin of the Military Jeep Club of Queensland 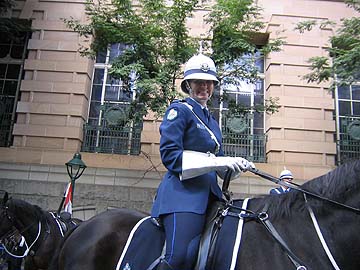 Constable of the Queensland Mounted Police 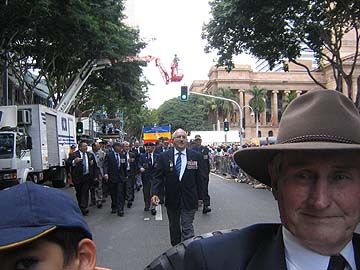 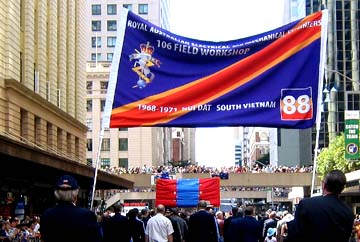 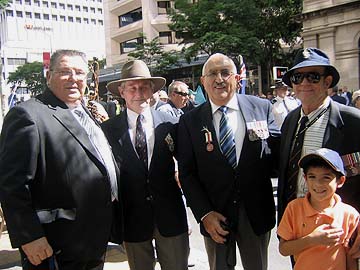 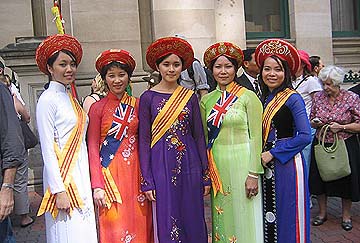 Lasses in Ao Dais. Part of the Vietnamese Vets contingent

The marshaller calls 119 forward. I climb in the back seat of the Jeep. I had forgotten how narrow it is between the wheel arches. Claude hobbles out of sight. He had made two magnitised 88 Tac Signs; he attaches them to the bumpers.

Milton squeezes himself in beside me. Claude explains to the Marshall that he has no choice but to take his grandson with him. After some debate the lad is lifted up to sit on the wheel arch beside me. I am to keep my arm around him. Claude gets into the front seat.

The youngest of Milton's grandsons is deposited on the other wheel arch, beside Milton. The Marshaller, already covered in sweat, is objecting but after further debate resigns in frustration. Our Jeep pulls out into Elizabeth and moves into the queue to be slipped into the March coming down George

The Jeep is from the Military Jeep Club of Queensland and driven by one of their members, Ralph Murfin; it is a very welcome service and honours the Armed Forces.

The Club, formed in 1974 and affiliated with the Military Vehicle Preservation Association, provides support to those interested in owning, operating and restoring WW2 vehicles. From the number of queries to the RAEME Net and 106 seeking advise on repairing old equipment, this organisation and its Forum looks like a good resource. They have a web site at http://mjcqinc.com/

A detachment of the Queensland Mounted Police comes up beside us. They wait to ride in behind the Miltary Police contingent when it arrives from upper George.

Milton falls into conversation with one of the Police and asks to photo her. Milton tells me it is because he "admires the turnout and the horse!". The bold and cheeky never lose the twinkle in the eye, however old and infirm they become. "Faint heart never won fair lady"

An hour and a half into the March, the 106 Banner appears in the center of the intersection. The Banner is carried by Frank Maloney and Des Keaton of 1 Armd Sqn Wksp. This is great to see given that that Unit was the progenitor of 106 and prepared the way for us. I had been told that John Bailey would be partnering Frank. I tell Milton that John looks much changed; I remember him as much bigger. Milton says that is because its not John

Frank and Des march the banner forward while John Strachan, leading for 106, halts the main body. We slip quickly into place behind the banner and John gives the order to march.

All this happens at such a pace that we do not see anything of our blokes except the Banner.

After some minutes, I manage to screw around and kneel on the seat with Milton holding onto my coat tails. The fellows really look great. It is good to see them. I wave a greeting and take a photo or two as pre-arranged by John Strachan. (used in one of the other Reports)

I wonder how many of our fellows are marching in cities and towns throughout Australia.

I attempt to shoot more photos of the main body by aiming the camera over my head with Milton responsible for guessing the right angle. Not all that successful.

We proceed up George and into Adelaide. I see my family and friends in the crowd. Claude's lad perfects a Royal Wave.

We pass the Town Hall. The Saluting Dais comes up. John Strachan gives the Eyes Left. In the vehicle we uncover. The Governor, blond and petite, takes the Salute.

Claude turns in his seat and takes a couple shots of our main body between Milton and myself.

Now approaching ANZAC Square, the on-lookers are as thick as ever. The overpass is packed. We take photos of the Unit Banner

The end of the March is near; we turn into Creek for the block to Queen. The clapping and cheering continues as it has for the whole journey. One lass is holding up a sign thanking the Forces for their effort and sacrifice in defending the Nation. She calls something. I don't have time to focus the camera on her.

We turn into Queen and move to the sidewalk. I am starting to get the shakes. Nearly out of the vehicle. Milton says I am standing on his shoes; maybe so but for the whole journey I have felt each of the extra 9 kilos he carries these days. Phil Bond and John Strachan arrive. They have arranged for the Jeep to drop us off at the Port Office hotel where arrangements have been made by the RAEME Association of Queensland. I disappoint them. I would loved to have met up with everybody but I have hit the wall. I cannot manage more today. Hope nobody thinks I don't care.

Pauline arrives to get me home. A large contingent of Vietnamese Veterans arrive. I ask if it would be Okay to photo some of their lasses dressed in ceremonial Ao Dai. 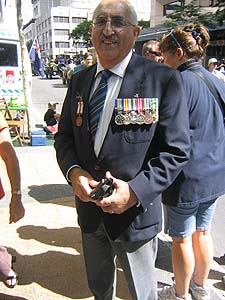 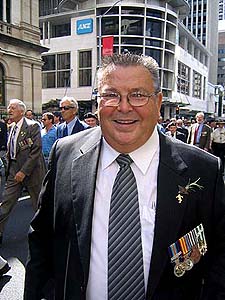 This Unit Association has delivered the goods just as the Unit did on Active Service. There is something prideful about 106 Field Workshop RAEME in all it's endeavours. It has been a privilege to be associated with them.

I recall that the Association was created by Frank Maloney and Phil Bond and subsequently breathed into life by the persistance of Phil. It marched today because John Strachan successfully claimed 106's right to do so by outflanking strong opposition from a few.

Later, close to midnight, I wake and check on the One Day Cricket World Cup. South Africa are 5 for 27 and in for another thrashing by Ponting's boys.

It has been the best of days. Thanks fellows